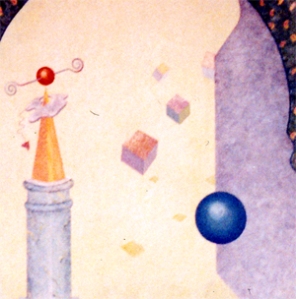 Three days in (to this new phase of my life) and I have been having fun reflecting on work in the eighties – some design work that I did at the Kirribilli Pub Theatre. I designed sets for 12 shows in 10 years, and designed costumes for the last 3 years with my sister, Shan Krauth.

Each set had two or three changes – the flats would be hinged and would swing open to reveal a new scene during the show. So the design often had a couple of flats that remained when the scene changed. The theatre was small (audience of 100 seated at long tables); the stage absolutely minute (about 4 x 3 metres) so I was always trying to create an illusion of depth or movement to extend the space.

The costumes had to be comic and allow for quick changes. I couldn’t sew very well, but I could ‘construct’ out of fabric and papier mache and I could paint on fabric.

Shan was the seamstress. We had so much fun designing for each character and selecting the fabrics – always on a tight budget.