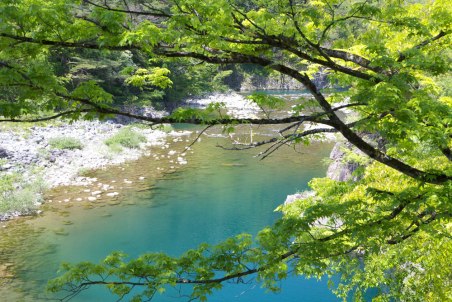 We’ve just spent a wonderful, nearly-4 weeks in Japan. We have seen and experienced so much, the inspiration for working and learning will last for eons (not to be confused with Japanese shopping malls).

This WordPress daily prompt suggested posting a photo that represents vacation. We have many 1000s of photos of our trip, so narrowing it down proves difficult. The photos above are from the day we visited Ogimachi, a World Heritage mountain village between Kanazawa and Takayama. This was actually our least favourite part of the trip. It was stinking hot with little shady refuge, and the village was overrun with tourists (including ourselves of course) all wandering aimlessly around. We had nearly 4 hours to waste until our booked bus would arrive.

At one point we wandered down a lane because we spied some shade to stand in. The shade revealed a beautiful view of the river. This photo hasn’t been manipulated, this is what it looked like. A fabulous photo cliché for the album.

We also stopped in at a couple of cafes for food. From a hole in the wall in someone’s house, we bought strawberry icecream in a wafer sandwich, a mango icecream float, and a coffee that tasted like boot polish. Later we ate soba noodles, which smelled and tasted spectacular, despite the fact that (or perhaps because) we were being watched by a giant red faceless Sarubobo doll.